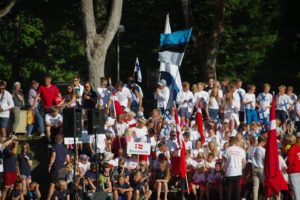 Today, on the 25th of July the Nordic Youth Sailing Championships has begun. Young sailors from seven countries – Finland, Sweden, Norway, Denmark, Latvia, Lithuania and Estonia – take part in the championships this year. Alltogether 198 sailors take part from whom 85 are girls and 113 boys. Most sailors come from Finland and Sweden. From Estonia 24 sailors are competing from whom 7 are girls and 17 are boys.

Most of today was passed by waiting for the practice races to start. Because the Optimist Class has most competitors (180), the male sailors were divided into two equal groups. The start was given to the first Optimist class 30 minutes later due to the lack of wind, but after the start the wind decreased again and the race was cancelled and the sailors were called back.

In the evening at 18:00 (6pm) the championships were formally opened. The young sailors were greeted by the vice-mayor of Pärnu, Rainer Aavik, who invited all of the sailors to come back to Pärnu to have a lovely vacation. After the opening speech all of the young sailors joined the ceremonial walk and was escorted to Pärnu Vallikäär (Pärnu moat) by the local orchestra. In Pärnu Vallikäär the commodore of Pärnu Yacht Club, Väino Hallikmägi, and the president of Estonian Yachting Union, Egon Elstein both said greetings to the sailors. The opening ceremony was ended by BMX-riders from the Latvian team “Greentrials”.

During the championships the whole Pärnu Yacht Club has turned into a Regatta Village, that will offer entertainment for both sailors and visitors. On Wednesday evening there is a chance to enjoy Pärnu BluesFestival (Mait Seger, Marek Talts and at 21:00 David Morrison from the UK) and on Thursday a concert by Daniel Levi band at 20:00 (8pm). The Nordic Youth Sailing Championships are being supported by Pärnu Yacht Club in collaboration with Estonian Yachting Union, also Pärnu Municipality, Sportland Estonian AS (Helly Hansen), AS Pomarfin and Pärnu Water.