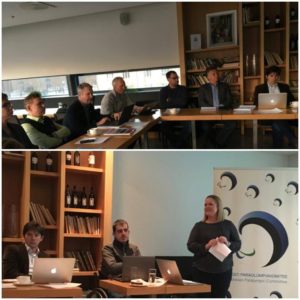 According to Massimo Dighe, para world sailing manager for World Sailing who visited Estonia in connection with the Baltic para sailing roundtable, Estonian yacht clubs already have the preparedness to initiate and host a Paralympic sailing program.

“Participating in the para sailing roundtable discussion in Estonia was very useful,” Dighe said. “Estonian yacht clubs are already ready to host and lead the para sailing program of Paralympics but lack the necessary equipment at the moment. But a project of an international work group in which representatives of the Baltic and Scandinavian countries participate proved that there is real interest in para sailing and I’m certain that with the support of the Estonian Yachting Union and the Paralympic Committee it is possible to create conditions which allow to launch projects already very soon.”

According to the president of the Estonian Paralympic Committee, MEP Urmas Paet, what is of importance is the synergy arising from the cooperation of countries around the Baltic Sea even though there is a huge difference between the level of the Scandinavian countries and that of the Baltic states.

The aim of the Estonian Paralympic Committee is to engage as many people with special needs as possible in sport and when it comes to sailing the country has accessible ports, preparedness of yacht clubs and neighbors with whom to compete, Paet said. The committee is planning events to showcase sailing already for the coming summer to attract new enthusiasts and spark competition.

According to para sailing activist Kulli Haav, it was remarkable that the Baltic roundtable attracted strong sailors, both with and without disability, from many different countries.

“Touring Estonia, we experienced yacht clubs’ open attitude towards popularizing the sport. I hope solutions will be found for organizational issues as well as some problems concerning accessibility,” Haav said. Para sailing also has to struggle for a place in sports structures, development plans and funding. But the sport provides people with special needs an opportunity to get out of home and enter a more active life, offering self-fulfilment, she underlined.