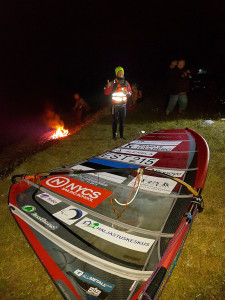 “The last surfing hours were extremely hard,” Puusta’s coach Jaak Lukk told Baltic News Service. “Due to overstrain, Ingrid wanted to break off the crossing. However, we managed to keep her motivated and she surpassed the deadlock. We are thrice happy.”

Due to weak wind, during the crossing Puusta decided to exchange her Formula sailboard to RS:X which belongs to her Olympic equipment.

To ensure the long journey is safe, the windsurfer was escorted by a safety boat with coaches from the Noblessner Yacht Club Sailing School, Ainar Annus, her personal coach Matthew Rickard and Jaak Lukk who is behind the idea of crossing.

“Having to stand in one position for a long time and big waves are the main factors to make my trip really hard. I will take this cool challenge to help people with disabilities and benefit society,” Puusta commented on the oncoming crossing a few days before the start.

With this act, Ingrid attempted to bring attention to handicapped athletes and raise money, so that disabled sailors would be able to start regular sail trainings for the first time in Estonia.